Daughters need fun adventure too! And this list of great adventure chapter books for girls will get the fun going, because girls need to read more than princess books!

Embrace this list of 25 great chapter books about bold and venturesome girls to inspire your own.

You can find these great adventure chapter books for girls at your local library or purchase through the affiliate links provided for your convenience.

As a girl, the last thing I ever would have read were books about princesses or trying to win the boy.

I wanted to read about daring, rough-and-tumble girls who seek out adventure or rise to the challenges thrown at them.

Julie of the Wolves was one of my all-time favorite books as a teen!

Julie of the Wolves

Faced with the prospect of a disagreeable arranged marriage or a journey acoss the barren Alaskan tundra, 13-year-old Miyax chooses the tundra.

She finds herself caught between the traditional Eskimo ways and the modern ways of the whites.

Miyax, or Julie as her pen pal Amy calls her, sets out alone to visit Amy in San Francisco, a world far away from Eskimo culture and the frozen land of Alaska.

Erin Law and her friends are Damaged Children. At least that is the label given to them by Maureen, the woman who runs the orphanage that they live in.

One night they all run away one night downriver on a raft.

What they find on their journey is stranger than you can imagine, maybe, and you might not think it’s true.

The True Confessions of Charlotte Doyle

Avi’s swashbuckling tale of murder and mutiny on the high seas has a fascinating twist: the heroine is a 13-year-old girl.

In 1832, Charlotte Doyle boards a ship bound for America and is caught in a battle between a mad captain and his ruthless crew.

Peter and the Starcatchers

In an evocative and fast-paced adventure on the high seas and on a faraway island, an orphan boy named Peter and his mysterious new friend, Molly, overcome bands of pirates and thieves in their quest to keep a fantastical secret safe and save the world from evil.

Growing up in a remote part of Alaska, Ivan and September Crane know that autumn is an unpredictable season – days of clear blue skies can give way to fierce, sudden storms in a blink.

Left alone when their fisherman father is delayed at sea, even their keen sense of their surroundings and the lessons they’ve been taught fail them. So does their common sense.

Soon brother and sister are caught up in a whirlpool of complications from which they can’t escape.

The Land of Elyon #1 The Dark Hills Divide

Inquisitive twelve-year-old Alexa Daley is spending another summer in the walled town of Bridewell.

This year, she is set on solving the mystery of what lies beyond the walls.

Legend says the walls were built to keep out an unnamed evil that lurks in the forests and The Dark Hills.

But what exactly is it that the townspeople are so afraid of?

Twelve-year-old criminal mastermind Artemis Fowl has discovered a world below ground of armed and dangerous — and extremely high-tech — fairies.

He kidnaps one of them, Holly Short, and holds her for ransom in an effort to restore his family’s fortune.

But he may have underestimated the fairies’ powers.

Is he about to trigger a cross-species war? 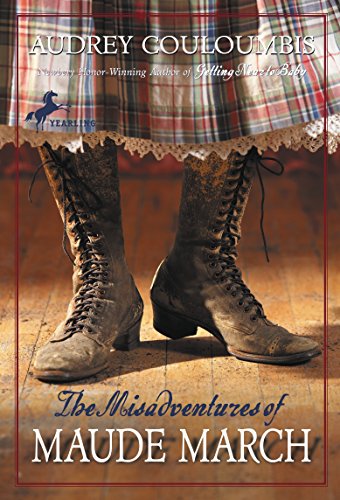 The Misadventures of Maude March

A rollicking story of what really happened out there on the wide open  range!

Not the lies the papers printed, but the honest-to-goodness truth of how things went from bad to worse and how two very different sisters went from being orphans to being outlaws and lived to tell the tale.

This acclaimed bestselling Newbery Honor Book from multi-award-winning author Sharon Creech is a classic and moving story of adventure, self-discovery, and one girl’s independence.

Through a set of cousins’ travel logs, we hear stories of the past and the daily challenges of surviving at sea as The Wanderer sails toward its destination — and its passengers search for their places in the world.

The Miraculous Journey of Edward Tulane

Kate DiCamillo takes us on an extraordinary journey, from the depths of the ocean to the net of a fisherman, from the top of a garbage heap to the fireside of a hoboes’ camp, from the bedside of an ailing child to the bustling streets of Memphis.

Along the way, we are shown a true miracle, that even a heart of the most breakable kind can learn to love, to lose, and to love again.

Eleven-year-old Nhamo lives in a traditional village in Mozambique, where she doesn’t quite fit in. When her family tries to force her into marrying a cruel man, she runs away to Zimbabwe, hoping to find the father she’s never met.

What should have been a short boat trip across the border turns into a dangerous year-long adventure, and Nhamo must summon her innermost courage to ensure her survival.

In the year 793, siblings Jack and Lucy are captured by fearsome Vikings with a thirst for battle and pillaging.

Taken to the court of Ivar the Boneless, Jack and Lucy are sent on a perilous journey – full of dragons and giant spiders – deep into the magical kingdom of the trolls!

In Nobody’s Princess, author Esther Friesner deftly weaves together history and myth as she takes a new look at the girl who will become Helen of Troy.

Billie goes out into the Everglades alone, to stay until she can believe in her tribe’s legends.

In the wilderness, she discovers that she must listen to the land and animals in order to survive.

With an otter, a panther cub, and a turtle as companions and guides, she begins to understand that the world of her people can give her the answers she seeks.

The Goose Girl (Books of Bayern)

In this beloved first book in the Books of Bayern, from New York Times bestselling author Shannon Hale, Princess Ani must become a goose girl before she can become queen.

Book of a Thousand Days

Master storyteller Shannon Hale’s beloved Book of a Thousand Days is equal parts fantastical and romantic, with an unforgettable protagonist to root for at its center.

How do you rescue a wild coyote trapped in an elevator in a downtown Seattle office building?

How do you save an injured baby seal at the bottom of a cliff with the tide coming in?

Fourteen-year-old Shannon Young, visiting from New Jersey, is about to find out.

As Dawson City goes up in flames, Jason Hawthorn itches to join the new rush for gold in Nome – nearly 2,000 miles away.

Jamie Dunavant, the girl he loves, has just returned from the States and is ready for adventure.

When a race to Nome with a $20,000 prize is announced, the two of them decide to attempt the journey together in their canoe.

No adults, no permit, no river map. After fifteen-year-old Jessie gets sent to Discovery Unlimited, an outdoor education program, she and six companions “borrow” the company’s rafting gear and take off down the Colorado River through the Grand Canyon on their own.

Twelve-year-old Emma Bolton is determined to join her father and her sick mother on their voyage to France.

She’ll do anything to escape Aunt Martha and hateful cousin Odolf!

She disguises herself as a boy and sneaks aboard a vessel she’s told is her parents’ ship.

Too late, Emma discovers that she’s a stowaway on Black Lightning, the most notorious slave ship afloat!

Theodosia and the Serpents of Chaos (The Theodosia Series)

Theodosia Throckmorton has her hands full at the Museum of Legends and Antiquities in London.

Her father may be head curator, but it is Theo and only Theo who is able to see all the black magic and ancient curses that still cling to the artifacts in the museum.

Ronia, who lives with her father and his band of robbers in a castle in the woods, causes trouble when she befriends the son of a rival robber chieftain.

The Hero and the Crown

Uncertain of the past, Aerin-sol, daughter of King Arlbeth, decides to forge her own future by challenging the lashing tongues of the dragon’s fire.

Aerin’s proficiency as “the Dragon-slayer” sets her on a quest for the stolen Crown of Damar, believed to be in the hands of rebellious northerners who threaten to destroy the Damarian people and their home forever.

Harry Crewe, the Homelander orphan girl, is pleased with her new home.

Life in Istan is certainly easy, but a voice in her ear whispers that the home of her heart is among the Hillfolk, among the descendants of Lady Aerin, who once wielded Gonturan, the Blue Sword.

Bloody Jack: Being an Account of the Curious Adventures of Mary ‘Jacky’ Faber, Ship’s Boy

Life as a ship’s boy aboard HMS Dolphin is a dream come true for Jacky Faber.

There’s only one problem: Jacky is a girl.

She will have to use every bit of her spirit, wit, and courage to keep the crew from discovering her secret.

This could be the adventure of her life… if only she doesn’t get caught.

« LEGO JUNIORS Easy to Build Awesome for Big Imagination, Fine Motor Skills
Use Jennifer Lawrence Photo As a Reason to Talk To Your Kids »