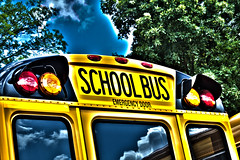 Discussions of the impending start to kindergarten has brought tears to many a mother’s eye. I’ve heard friends say things like — “I just know I’m going to cry when he gets on the bus” or “I’m so sad my little girl has grown up so fast. Where has the time gone?”

Honestly, I had an advent calendar counting down the days until I could get Vman out of my house and back to school. Yes, he is entering kindergarten. But he’s also been attending preschool and pre-K for the last years so I’m used to him being out of the house. I’m also used to having the ability to actually get things done while he’s off having a great time with his friends and learning lots of things I could never pull together myself. So none of this mumbo jumbo sentiment about my “baby” leaving the nest.

As the days got closer to the start of kindergarten, Vman became more and more anxious. Even to the point of telling me that his stomach was hurting. This boy was seriously concerned. And who wouldn’t be? Going to a new place. Meeting new people. Not knowing the drill. It’s enough to send anyone into a tizzy.

Today was his first official day. We did the usual ritual — photos, lots of wows and exclamations about him being a kindergartener. We all piled into the car  (including dad) to drop him off.

I had barely pulled into a rolling stop as Vman popped off his seatbelt, grabbed his backpacked and waited to jump out the door. As the monitor opened the car door, he literally sprung out of the car. As an afterthought, he turned around to mumble something about goodbye and sprinted toward the playground until the school bell rang.

Stunned, my husband and I just sat there in silence. There was no time to be emotional. He just took off and left us there as the chauffeurs we were. The drop-off monitor gave me a lop-sided knowing smile as if to say, “Welcome to Kindergarten, Buddy.”