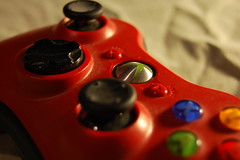 You say you are sick of your husband playing Xbox all Friday night? Here’s how to turn his obsession to your advantage.

1. Uncover information. Men don’t like having deep conversations one on one. It makes them horribly uncomfortable. Women, on the other hand, eat this stuff up. It’s how we bond. You tell me something about you. Then I’ll tell you something about me.

When men play video games, however, they’re distracted. They’re busy thinking about their strategy for blowing up the other team (or how they’re getting their butt kicked online by a 14 year old). This distraction brings down their defenses. Now is the time to strike.

Subtlety is of the essence. Just as a puma creeps up on its prey, your husband won’t know what hit him until it’s too late. Casually sit by him with light-hearted chit chat. Compliment him about his own prowess at the game. Then drop in a statement like, “Wow. Bobby seems to be really checked out. Do you think he’s on drugs?” Then you’ll get the real story.

This tactic can be used to discuss gossip hubby won’t spill, his feelings, in-law issues and things that are bothering you. Items off the table include finances, watching sports and sex (unless you’re saying you want intimate time RIGHT NOW).

2. Create a closer relationship. Learn to play. It will bring you closer. Men bond over bombs. You can literally spend hours not saying a word to your husband. Most men can’t think of anything that sounds sexier than “I’ll cover the troops while you take down the multi-ray xenon firebox.”

While you’re kicking the enemy’s ass on Halo and Black Ops, he’ll be thinking of what a kick-ass wife you are.

3. Have something to get excited about together. When my husband and I would get stuck on a certain level, we would talk about strategies over dinner. It was the ultimate foreplay. While we were chatting up stategies, we would go from eating to cleaning dishes together. And ladies, there is nothing hotter than a man cleaning the kitchen!

Before you laugh at me, try it out. As my husband disappeared into the vortex of the first Halo addition, I asked to play a campaign with him. You don’t have to know what that is. Just ask! He’ll be so thrilled you are showing interest in something close to his heart that he may not even groan when you say you want to see the latest romantic comedy movie.

MOUTH OFF: What is your stance on video games?

« Staycations with Young Kids Is No Vacation
Confess Your Parenting Dirty Little Secrets! »