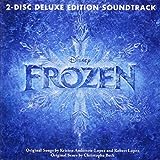 Disney has produced so many animated features in the past decade that I think many of us forgot what a serious powerhouse they can be. Churning out film after film, did I enjoy many of them? You bet. But did any of them make me want to jump out of my seat with excitement? Did any of them make me smile with glee just from the sheer joy of watching? Did any of these films leave me wanting more? Not particularly. Then along comes Frozen.

Leaving the theater, we were absolutely bowled over. And I have to admit, I found myself humming some of the tunes while walking out of the theater. What I didn’t expect was my family would quickly find they had Frozen fever as well. (Did you see the instant puppets we created?)

My boys begged me to get the Frozen soundtrack. Twist my arm, right? I downloaded it and thought they might enjoy listening to it a couple of times. Before I knew it, we were having a full blown dance party… interpretive dance and all to the complete soundtrack. Keep in mind, I have boys. And they loved every second of it.

Then I added the soundtrack to my car. Guess what’s been playing non-stop! Yup. And guess what’s stuck in my head. Yup. But you won’t hear any complaining from me. I thought I would never have the chance again to enjoy musical soundtracks. Then Disney creates such a spectacular musical film that it’s just a matter of time before they launch Frozen The Musical.

We were playing the soundtrack in the car when I went to drop off my son at school last week. He was embarrassed that someone might hear him singing the songs and asked me to turn them off before we reached the drop-off. But lo and behold, when I picked him up from school and a friend for a play date, they asked to listen to it on the way home. There’s nothing like looking in the rear view mirror to see two 1st Grade boys belting it out. “Do you wanna build a snowman! Do you wanna go a play!!!!”

We’ve seen the movie twice in the theater. How long were they going to make us wait to get a copy into our home. Imagine my surprise when I discovered we could get a serious discount just by pre-ordering it on Amazon! I suggest any fan of Frozen pre-order it now. Admit it. You’re going to get it anyway, so you might as well get a good deal before all of the other people pay full price. 🙂

« Victory! I Didn’t Gain an Ounce During Holiday Break with 6 Tricks
A Year’s Worth of Instagram Snapshots Wordless Wednesday »