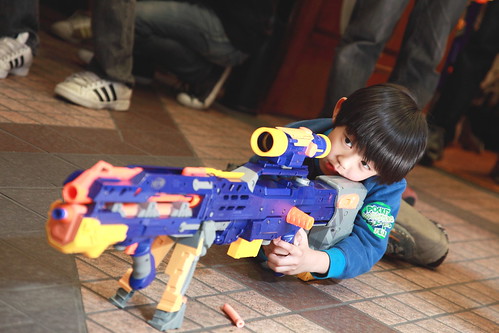 I could just shoot the person who gave my kindergardener a toy gun for Christmas. Okay, calm down. I’m not really going to shoot them. But I am pretty mad that someone thought it was appropriate to give my kid a gun of any kind as a gift.

When we opened it, I was shocked to say the least. The mother apologized and said they had purchased it before recent incidents — most notably Sandy Hook. However, even before these tragic events, giving another person’s kid a gun of any kind — squirt gun, Nerf gun, air gun rifle, bebe gun — simply isn’t appropriate. Please understand, I’m not anti-gun. But I do believe gun safety starts at home, which also means teaching children guns of any kind are not toys to be trifled with.

Let’s not kid ourselves. Boys will make guns out of anything, including sticks, Legos and even stuffed animals. It’s a different story when some realistic weapon is handed to them. And to a six year old no less. The Nerf gun Vman received for the holidays is fluorescent green and orange. Nothing real about that, right? Wrong! This is a double barrel shotgun you have to load by cocking open and clicking closed — not unlike what you would see in many Arnold Schwazenegger movies. Suddenly, the Terminator is in my house.

Check out a video of someone reviewing this item to see how it works:

By the end of the first day, I couldn’t take it anymore. I had successfully sheltered my six year old from the horrors of Sandy Hook, but I needed him to understand the damage real guns could do. I told him I needed to have an “adult conversation” with him — something I had never done before. That really got his attention! I explained to him although his gun wasn’t real, it was designed like guns that could and do hurt people. We talked about the fact there are real bad guys in the world and we have a responsibility to act with caution with any type of gun (real or not).

To my surprise, Vman soaked in what I said, and we came to an agreement. I would pin targets onto the backyard trees, and he could aim for those targets only. No indoor use would be permitted. And, even when outside, he could never point the gun at a person.

For now, Vman will be more than happy with his light sabers and video games. He will learn how to handle basic guns when he’s old enough to properly handle them with adult supervision. And I’ll probably reconsider my stance on toy guns when he’s older. Until then, only mama decides if and when my child will play with anything that has a trigger.

« Commando Men: The Debate of Underwear
The Curse of Becoming Your Parents »