This is my story of how I helped my extremely sensitive child survive braces.

At this point of our sensory journey with my kiddo, there isn’t a lot that just strikes fear in me anymore.

But can I just tell you — the very thought of my sensitive child getting braces was enough to send me into a cold sweat.

And no, I’m not exaggerating.

How on earth was a child who can’t even handle a tag in his clothes going to be able to handle a host of metal brackets, wires and goodness knows what else?!?

How to Help Your Sensitive Child Survive Braces

For my new readers, my son Vman has Sensory Processing Disorder. Right now, he’s nine years old and has had braces on for more than a year.

Vman can’t stand anything tactile… which is a serious issue when you’re talking about putting braces on a sensitive kiddo like him.

But his permanent teeth were coming in sideways and on top of each other.

This wasn’t just about looks… he was going to have issues if we didn’t address his teeth.

This is how we have conquered braces (even through tears some days).

First off, find the right orthodontist for your child.

I used local FB message boards as well as other moms I knew to talk about the different styles of orthodontists in my area.

(Honestly, after doing a bit of homework — the cost was pretty much the same, so it came down to the personality of the orthodontist for sure!)

I heard nice things about this person and that… what I looked for was any red flags versus comments about how much their own child liked seeing the ortho.

It turns out we have a local dad who has a child in my son’s elementary school.

After meeting with him in person, it was obvious he was willing to work with us (even though he hadn’t necessarily worked with a kiddo with Sensory Processing Disorder before — well, at least to his knowledge).

His thoughts were if they needed to schedule extra time or do things in additional stages, so be it.

The selling point for me was he told me if Vman really couldn’t handle the initial expander and brackets from first appointment after a couple of days, he had no problem just taking them off and we would discuss our options. 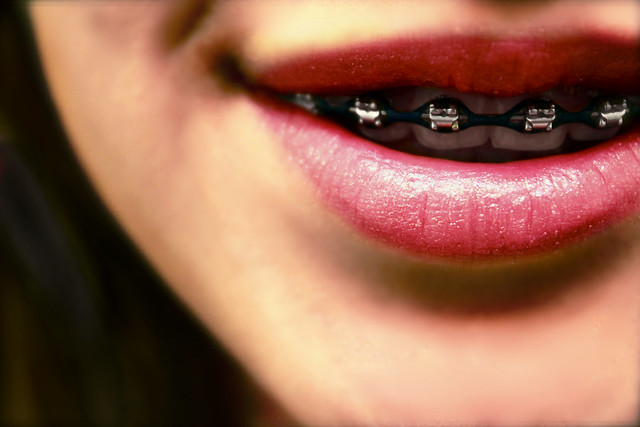 Before you even take your child to your orthodontist, let your kiddo know that no matter what — you’re a team in this together.

That anything that needed to be done… the two of you would talk about it together.

This doesn’t mean your child can make the decisions, but explaining to your child what’s going on and getting their buy in is key.

From the get go, I told Vman I wasn’t asking him to do anything I hadn’t done myself as a kid and that, at any point, this became too much — well, so be it.

We would figure out plan B.

Also, as part of being a team member, I’ve talked openly about my own experiences with braces.

I had the full metal mouth (back when the brackets were huge) as well as the headgear I had to wear at night.

Oh yes, I was styling in middle school. We could laugh together as a team at how ridiculous (and rough) I had it… which definitely has made him feel better. 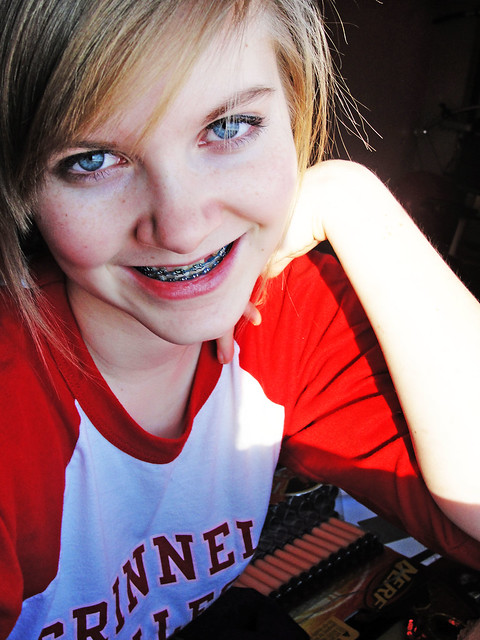 When we first met with our orthodontist, he told me that a lot of kids are willing to deal with the initial discomfort of braces if they already have classmates who have gotten braces.

I was skeptical of this, to say the least.

But I shouldn’t have.

A couple of Vman’s friends got braces (as well as an expander) a month before him.

He was able to see what they looked like, ask his buddies what they thought and see that his friends weren’t in agony to know that he, too, could survive braces.

So don’t be the first kid in the class to get braces!

Wait to make sure they have a built in community of buddies in the same boat.

Don’t go Back There

At this point, your child should be old enough to go back to the technician area without you accompanying them — just like at the dentist.

Just as with many kids, my son definitely does better without me there as an emotional crutch. Sounds harsh but it’s true.

If there’s an issue, I have the technician come and get me.

Otherwise, I butt out!

Don’t feel the need to stay on the same schedule as the orthodontist, which can make all the difference to survive braces.

Ours quickly learned that if it was going to be a long appointment, we may as well break it into two stages because Vman wasn’t going to make it through otherwise.

It took two appointments to get the full spectrum of brackets on his teeth (as well as over the back molars).

After the first big appointment, Vman was crying, upset and emotionally spent. Meanwhile, his buddy who happened to be there at the same time came out smiling and showing off his new hardware. So be it.

I took Vman to get some soft serve ice cream and called the school to let them know he would be home with me the rest of the day.

It was an important step on my part to let him know that we would go at his rate.

When the second part of the appointment came later that month, he felt emotionally supported from me and ready to “get on with it.”

If your sensory kid is like mine, he hates surprises.

I do my best to find out just what will happen at the next appointment.

And the night before, we talk about what I understand will happen at the appointment.

It lets Vman mentally get ready.

The last appointment we had they sprung those elastic bands on us.

Oh my goodness it was a mess!

We hadn’t had our usual technician at the last appointment and she didn’t really check to see what was coming up next. Lesson learned for everyone!

Be Patient to Survive Braces!

Sometimes your child will just get all frothed up at an appointment, like at the last appointment where they sprung the elastic bands on us.

Vman was in absolute tears and the technician came to get me.

Rather than allowing myself to get caught up in how upset he was, or to feel pressure that we needed to get things moving along because all of the technicians were looking at us, I just took a deep breath and focused on the moment with my son. (In fact, I excused the technician and told her I’d be with her in a bit.)

Once I had my son a bit more calmed down, I told him we had two options.

The first option was something we all have to do sometimes — pull himself up by the bootstraps and get through this.

Or second, walk away for now and come back another day. I left the choice in his hands.

Because I empowered him, he decided that he just wanted to be done with it rather than come back.

We got through figuring out how to put on those darn elastics and left, talking about how much those elastics suck and what we could do to make his mouth feel better (cold popsicles, pain medication, cuddles on the couch, etc.).

To be honest, I was ready for a rough week; however, within two days the elastic had become a non-issue much to my surprise! Seriously, your sensory kids will surprise you some days.

Out of this whole process, I always make sure I let my son know what a fabulous job he’s doing.

What I mean by that is I don’t blow smoke his way and try to puff up his ego.

Instead, I let him know the things he’s doing really well.

For example, the appointment with the elastic bands.

He really could have just lost it. Instead, he shared his feelings and really thought about what he wanted.

I told him what a mature kiddo he’s becoming to be able to embrace and acknowledge his feelings but also to be able to assess the situation and decide what’s right for him.

If he had decided he needed to go home, I would have said the same thing to him.

Want to know the best part about Vman getting braces.

No… it’s not that his smile will be straight.

It’s that when he smiles at me, it’s genuine because he knows I have his back and his best interest at heart and that we’re always a team.

And as you’re getting your child ready for braces, here are some things you’re going to want to have on hand when they do get them on! Just click on the following affiliate links.

Shipping is FREE with Amazon Prime or $35+ orders. Sign up for a FREE 30-Day Amazon Prime Trial HERE. Along with FREE shipping you will get access to thousands of movies, tv shows, books and music for FREE!