You are going to absolutely love these funny and fun elf on the shelf ideas!

We have a friend who loves taking her Elf on the Shelf to a whole other level.

Honestly, I think she loves putting together the scenarios for their elf just as much if not more than the kids love seeing them.

The creativity is astounding! This post contains affiliate links.

She’s been doing this for a number of years now and her Facebook friends all flip out over these (me included)!

I finally asked her if I could share some of her amazing creations…. these were meant to be shared! 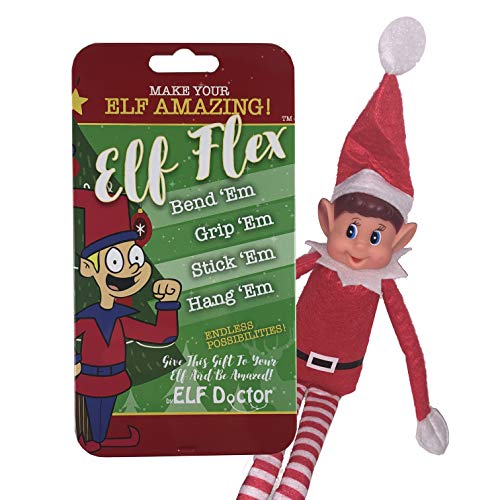 But before you get started, you absolutely have to have the Elf Flex Kit!

It will make molding your Elf to stay in position SO much easier.

Funny and Fun Elf on the Shelf Ideas

McElves – The Elf Version of McDonalds

Today, the Elf on the Shelves are moonlighting at McElves.

The only question is… would you like fries with your order?

The Elves are really getting into their Nutcracker performance.

You can find this adorable Nutcracker Elf costume on Amazon!

And don’t forget about the boy Elf’s costume either.

It seems that People Magazine made a mistake and picked the wrong person!

Apparently, he took matters into his own hands…..

My son dreams of being a dolphin trainer!

Have the Elf leave your chid a Dolphin Trainer present!

The Elf Got Married!

It was a big year at the North Pole.

Apparently the Elf got married!!

What was the Elf up to all year long when they weren’t at your house?

Well, they did manage to sneak in a trip to Paris and left your kiddo an Eiffel Tower ornament!

But leaving a travel ornament would be a great way to let your kids know that they’re going on a trip, too.

The Elf is looking extremely dapper in his Tuxedo… and doesn’t he know it!

Put him next to his Aston Martin and there’ll be no resisting him.

The Elves are enjoying the Aloha spirit on their trip to Hawaii.

And they’ve brought back some sunshine with them with a Hula Dancer Grass Skirt Costume for the little one.

Do you remember this commercial?

I’d like to give the world a Coke and fill it up with love! Do you remember this adorable commercial?

The trick to this Elf set up is cutting around the bottom of the bottle.

Place the Elf inside and seal back up with invisible tape.

The Gund Polar Bears is my boys’ personal favorites — we have one in white and one in brown!

And the best part is your kiddo can have lots of bath time fun later.

Just add a few color pellets that can also be used in your child’s bathtub — my boys love these!

Ghostbusters vs. The Elf on the Shelf

This Elf ain’t afraid of no ghosts!

Get your own Staypuff Marshmallow Man.

Who’s ready for some holiday games?

Enjoy the Wheel of Fortune game and then play a round with the whole family!

The Elf was getting a little homesick for snow.

What’s an elf to do?

Build an igloo of course!

It just takes some sugar cubes.

Scout Elves at Play will give you loads of ideas to do for the kids.

From one Dr. Seuss book to another…. Thing 1 and Thing 2 have nothing on the Elf!

The Elf takes his chances on The Voice.

Elf on the Shelf to the rescue!

Have Elf put on his own Super Hero costume and save the day.

The Elf is excited for snow.

Grab these fun wood building blocks to create the perfect set up.

Stuck in a balloon

Uh oh. Not sure how he possibly got in there but now he can’t get out!

Be sure to include the marker in the balloon when you set this one up.

Who doesn’t love Lucy, the Peanuts character who always offered her “advice” for 5 cents.

Now the Elf is getting in on the fun!

All you need is a scrap piece of cardboard and some markers.

Leave it to the Elf to hide the toilet paper and replace it with gold duck tape!

Let’s hope you can find where he hid it or that you have additional bathrooms.

Did someone say the coffee ready?

This Elf has become a Starbucks barista – a personal favorite of mine!

Grab a classic Starbucks mug while you’re at it…

Cuddled up in a snow globe

Christmas wouldn’t be Christmas without a snow globe or two…

And have the Elf leave behind this adorable snow globe featuring him!

This time he’s rolled down the staircase leave a toilet paper trail.

looks like the Elf’s sleigh needs some tune ups…

Good thing he knows how to read the manual!

Find a sleigh worthy of your own Elf.

The high vantage point makes for some excellent scouting of the kiddos’ behavior.

All you need are some craft sticks and a miniature wreath to create this adorable tree fort.

The Elves love to help out Santa.

Make this one even more fun and create a little miniature treasure map for your kids to follow!

The Elf is ready to get this tree going.

Good thing he’s able to use your child’s firetruck to help him get high enough.

The Elf is always cutting edge … swooping in on his own drone!

Do you want to build a snowman?

Elsa and Anna would be proud of the Elf’s creation!

He wrapped the toilet!

That Elf has wrapped the toilet in wrapping paper.

Welcome to the North Pole Reunion!

Use your child’s stuffed animals and even add one of the Elf on the Shelf Pets to the group!

There’s a Saint Bernard dog, an Arctic Fox, and even a Reindeer!

Jet packing to the North Pole…

Why doesn’t the Elf stop by the moon on his way up North.

The Elves are having a pool day and they brought the fun!

Put your Elf in their own unicorn floatie.

Or have her don the perfect mermaid tail!

The Elf didn’t want to be left out! So he turned himself into one giant Kiss.

He may also leave behind a HUGE Hershey’s Kiss to enjoy later.

This Elf is having fun in his tux.

This Elf has big dreams.

He’s not throwing away his shot.

Six Flags and Cedar Point May be closed for the season… but there’s always Santa’s Village!

Hmmm…. The Elf should know not to feed the animals people (er Elf) food.

Well at least he’s practicing his hand writing on the chalk board.

It’s time for the Elf to head back to the North Pole!

He’s all ready for takeoff.

Leave it to the Elf to leave one last message in snow on the windows.

Spray on your own snow to your windows to write a message.

« Are You Using Santa As a Threat?
Starbucks Eggnog Latte Copycat Recipe »