Fighting kids about the television is a never ending battle. Just as we get them hooked on PBS programming, their friends introduce them to the most vacuous, mind-numbing, make-you-want-to-hit-your-head-against-the-wall TV shows. Oh yes. I’m referring to SpongeBob SquarePants. 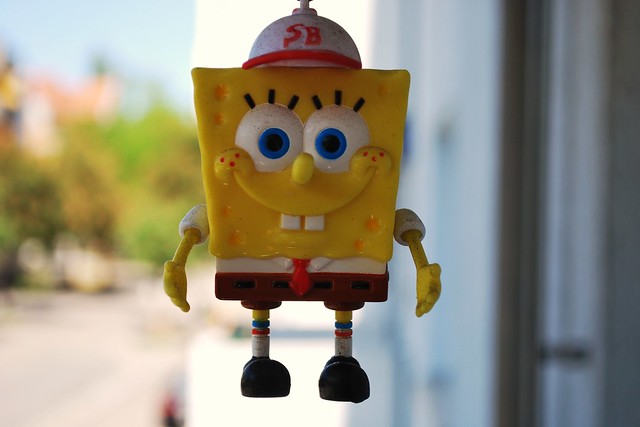 I do a fairly decent job controlling what my kids watch. However, I recently had two kids home sick. And you know, parents, that in a situation like that, you do anything possible just to survive the situation. Having one child home ill is tough enough. Add another one into the equation and suddenly you have knock-down, drag-out fights between the kids. I had to physically put myself between them to keep them from injuring each other.

So when I went to the kitchen for five minutes and everything was quiet, I worried the TV room had exploded. Instead, I found a more horrific scene. They had found SpongeBob SquarePants on one of the channels. And, you guessed it, it was a marathon. NO!!!!!!

Although they were settled down, my brain turned into a gelatinous gooey mess. One hour of that programming literally made me want to cry. How have parents survived this show for this long?

SpongeBob SquarePants has no redeeming qualities. I kept waiting for some small social lesson. Instead, it offered ridiculous antics just for the sake of being obnoxious.

Once the boys were better, poor SpongeBob once again was banned from our house. But I have a feeling that while I’ve won the battle, the kids ultimately will win the TV war.

And in case your wondering just how ridiculous this show is, a video is circulating on YouTube of Russian soldiers marching to the theme of SpongeBob SquarePants. Enjoy?

EVOLVE: What kid television program can you not stand? Have you been able to keep it out of the house?