Vman is deathly afraid of falling into the hard cement. So being a creative mama, I decided to take them to the local running track. No hard surface. No sharp turns. Just around and around and around. But even the best laid plans fall short sometimes. The track was closed. Plan B!

We drive to another football field but we couldn’t find the opening to get on. I was feeling rather desperate at this point as the fever of the boys’ worry became eminent. We found an unlocked gate and just as we were about to go through, the two men training on the field came out and started locking the gate.

There was no way they couldn’t have seen we were trying to figure out how to use the area. And in a desperate plea, I asked them to please not lock the gate. The first man looked right at me and nastily said, “If you had asked nicely maybe I would have let you in.” 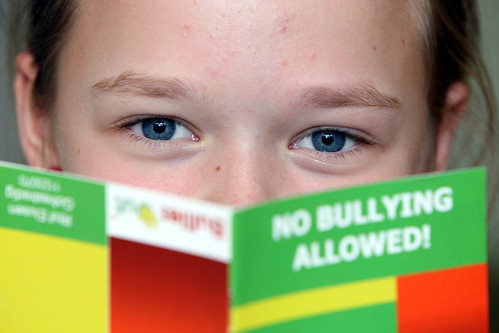 I was stunned and confused. How on earth had I been rude? In fact, I had asked with a touch of desperation to please let us in. I had even said I would lock it after we left.

I stated again that I just was trying to teach my kids how to ride their bikes safely. And the older man, around 60, said my kids could ride in the parking lot. Then the two of them walked away laughing. Seriously?

I had two visceral reactions. One, I was thrown back to the days when I was bullied everyday at school. Suddenly I was that elementary kid who wore her heart on her sleeve and cried because there was no relief from the meanness of kids.

The second reaction was “Oh no you didn’t!” I’m not that little girl anymore. But I had the kids with me and was so stunned that grown men would act like middle school bullies that I just decided to let it go.

The entire experience, however, was the perfect launching board to really talk about bullies with Vman. He was quite horrified that someone would act like that and completely mystified it would be an adult.

But we all know the hard fact that adults can act like bullies. Who are the bullies in your life? Who are the wolves in sheep’s clothing that act like they have your best interest in heart but really have their own agenda. These guys were outright jerks, but so many of the poisonous people in our lives present themselves as caring family or friends.

Kids with special needs are more likely to be bullied at school. But only by having an open dialogue with our kids can we begin to give them the tools to disarm bullies.

That day I chose not to be a lamb but rather trust in my own inner strength and not let the poisonous comments of those jerks affect my kids or myself. And that example really stuck with my kids.

Later that day, Vman asked me why those guys were so mean to us. I told him they were probably always jerks and still are jerks. And he replied, “Yeah, until the day they die.” Good to know he’s learning that it has to do with those morons and nothing to do with him. His inner strength started to shine that day. I hope you have your own inner strength to dismiss the bullies around you and trust in yourself.

Read books about bullying to read with your kids! Consider the following affiliate links provided for your convenience:

Shipping is FREE with Amazon Prime or $35+ order. Sign up for a FREE 30-Day Amazon Prime Trial HERE. Along with FREE shipping you will get access to thousands of movies, tv shows, music and books for FREE!

« Insanity and Infants – A Hard Cocktail to Swallow?
Forty, Fabulous and Fit? »