Just because summer is upon us doesn’t mean your child shouldn’t continue reading during the holiday — just try this summer reading list!

Your kiddo will need a break from the sun and get some downtime during the long summer days.

Curl up with a great book, keep their minds sharp and create some fun family memories with this wonderful summer reading list!

A special thanks to the Association for Library Service to Children for the wonderful summer reading inspiration.

Creepy Carrots! and SUCH a good book. We absolutely adore reading it.

I Want My Hat Back and Mr. Tiger Goes Wild are also personal favorites in our home. 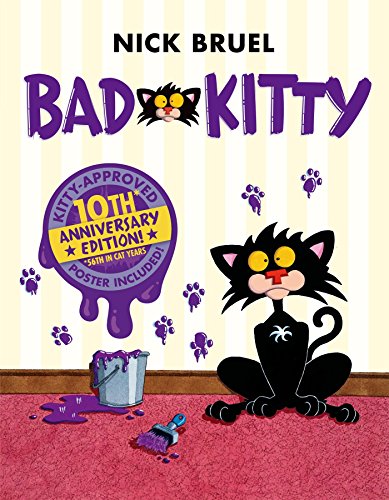 From the creator of The New York Times bestseller Boing! comes the riotous story of a cat gone berserk — four times over an in alphabetical order each time.

Kitty is not happy hen she’s told that her favorite foods are all gone and all that’s left are Asparagus, Beets, Cauliflower, Dill… and 22 other equally unappealing vegetables. 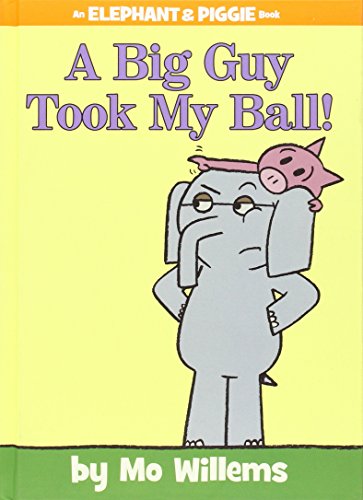 A Big Guy Took My Ball! (An Elephant and Piggie Book)

Gerald and Piggie are best friends. In A Big Guy Took My Ball!

Piggie is devastated when a big guy takes her ball! Gerald is big, too… but is he big enough to help his best friend?

Rubina has been invited to her first birthday party, and her mother, Ami, insists that she bring her little sister along.

Rubina is mortified, but she can’t convince Ami that you just don’t bring your younger sister to your friend’s party.

So both girls go, and not only does Sana demand to win every game, but after the party she steals Rubina’s prized party favor, a red lollipop.

Kids will giggle as they count all the animals that have frightened the monkeys off the pages.

Full of fun reader interactions and keeps readers guessing until the very last page! Matching Mac Barnett’s brilliant wit are Kevin Cornell’s luminous illustrations, which will have young readers begging to count the monkeys all over again. 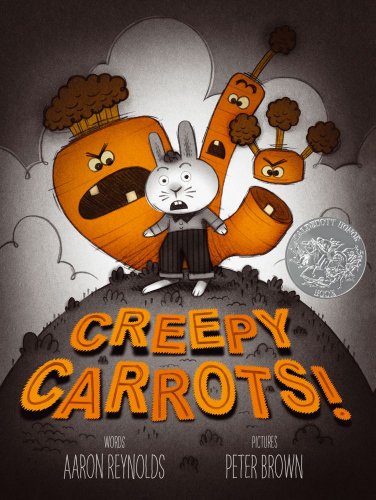 In this Caldecott Honor–winning picture book, The Twilight Zone comes to the carrot patch as a rabbit fears his favorite treats are out to get him.

Celebrated artist Peter Brown’s stylish illustrations pair perfectly with Aaron Reynold’s text in this hilarious picture book that shows it’s all fun and games… until you get too greedy. 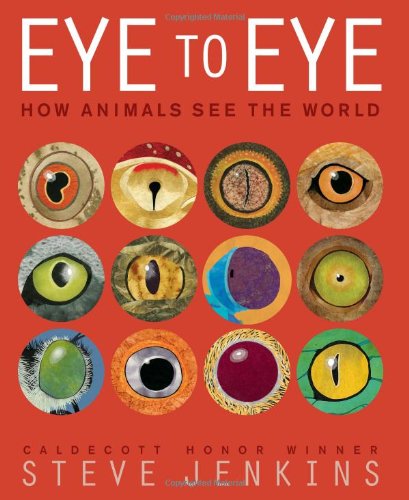 Eye to Eye: How Animals See The World

In his latest eye-popping work of picture book nonfiction, the Caldecott Honor–winning author-illustrator Steve Jenkins explains how for most animals, eyes are the most important source of information about the world in a biological sense.

The simplest eyes — clusters of light-sensitive cells — appeared more than one billion years ago, and provided a big survival advantage to the first creatures that had them.

Since then, animals have evolved an amazing variety of eyes, along with often surprising ways to use them.

How Big Were Dinosaurs?

Have you ever wondered what it would be like to take a Velociraptor for a walk, or try to brush a Tyrannosaur’s teeth?

We think of dinosaurs as colossal giants, but how big were they REALLY?

With kid-friendly text and seriously silly illustrations, this fact-filled book puts dinosaurs next to modern animals so that you can see exactly how they size up.

I Want My Hat Back

The bear’s hat is gone, and he wants it back.

Patiently and politely, he asks the animals he comes across, one by one, whether they have seen it.

Each animal says no, some more elaborately than others.

But just as the bear begins to despond, a deer comes by and asks a simple question that sparks the bear’s memory and renews his search with a vengeance. 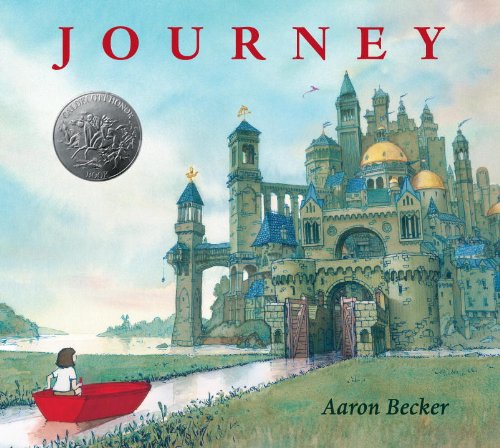 A lonely girl draws a magic door on her bedroom wall and through it escapes into a world where wonder, adventure, and danger abound.

Red marker in hand, she creates a boat, a balloon, and a flying carpet that carry her on a spectacular journey toward an uncertain destiny.

When she is captured by a sinister emperor, only an act of tremendous courage and kindness can set her free.

Can it also lead her home and to her heart’s desire? 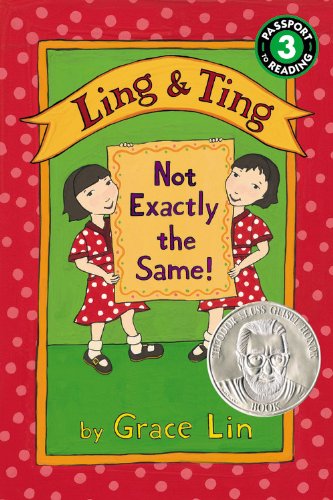 Ling & Ting: Not Exactly the Same! (Passport to Reading Level 3)

Ling and Ting are two adorable identical twins, and they stick together, whether they are making dumplings, getting their hair cut, or practicing magic tricks.

But looks are deceiving — people can be very different, even if they look exactly the same.

Are you bored with being so proper? Do you want to have more fun?

So he decides to go wild. But does he go too far?

From Caldecott Honor artist Peter Brown comes a story that shows there’s a time and place for everything… even going wild. 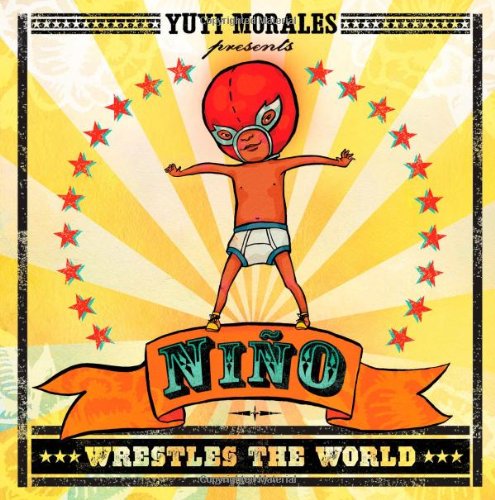 Señoras y Señores, put your hands together for the fantastic, spectacular, one of a kind . . . Niño! Fwap! Slish! Bloop! Krunch!

He takes down his competition in a single move!

No opponent is too big a challenge for the cunning skills of Niño — popsicle eater, toy lover, somersault expert, and world champion lucha libre competitor!

Old Mikamba Had a Farm

This fabulous version of the classic nursery song “Old MacDonald” introduces children to a menagerie of African animals and their sounds.

It is beautifully illustrated by Caldecott Honor winner Rachel Isadora, with her signature collage-style artwork.

Follow a day in the life of the panda cubs at China Conservation and Research Center for the Giant Panda at the Wolong Nature Preserve, the largest research facility for giant pandas in China.

Cubs are raised together in a protected setting — dubbed panda kindergarten — where they grow strong and learn skills that will help prepare them to be released into the wild when they are older.

At night, a normal little girl imagines she is a princess, but not just a princess who wears pretty gowns and goes to balls.

She also gets to fight dragons and tame trolls.

But one morning she wakes up and begins to think maybe her royal adventures aren’t so imaginary after all.

From the best-selling author of The Quiet Book, this jacketed picture book is perfect for every little girl who dreams of being a princess. 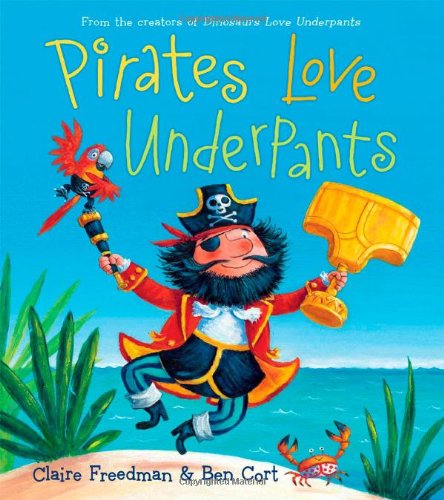 Grab your peg leg and your parrot — and don’t forget the underpants!

This wacky picture book pairs pirates and underwear in an uproarious adventure.

One rainy day in the city, an eager little boy exclaims, “Rain!” Across town a grumpy man grumbles, “Rain.”

In this endearing picture book, a rainy-day cityscape comes to life in vibrant, cut-paper-style artwork.

The boy in his green frog hat splashes in puddles — “Hoppy, hoppy, hoppy!” — while the old man curses the “dang puddles.”

Can the boy’s natural exuberance (and perhaps a cookie) cheer up the grouchy gentleman and turn the day around? 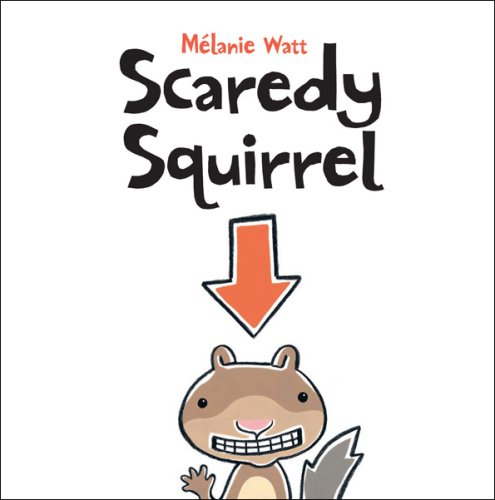 It’s way too dangerous out there.

He could encounter tarantulas, green Martians or killer bees.

But in his tree, every day is the same and if danger comes along, he’s well-prepared.

Then Scaredy suddenly finds himself out of his tree, where germs, poison ivy and sharks lurk.

But as Scaredy Squirrel leaps into the unknown, he discovers something really uplifting. 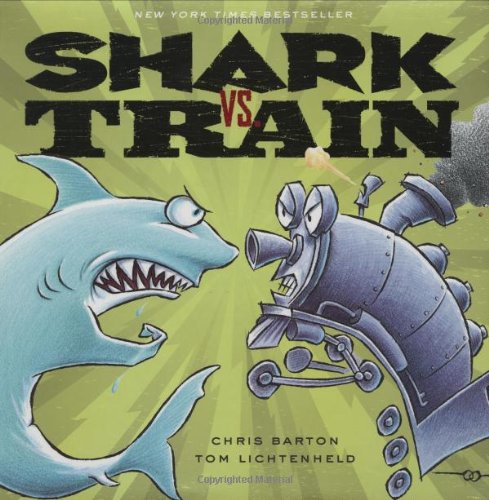 If you think Superman vs. Batman would be an exciting matchup, wait until you see Shark vs. Train.

In this hilarious and wacky picture book, Shark and Train egg each other on for one competition after another, including burping, bowling, Ping Pong, piano playing, pie eating, and many more!

Who do YOU think will win, Shark or Train?

This Moose Belongs to Me

Wilfred is a boy with rules. He lives a very orderly life.

It’s fortunate, then, that he has a pet who abides by rules, such as not making noise while Wilfred educates him on his record collection.

There is, however, one rule that Wilfred’s pet has difficulty following: Going whichever way Wilfred wants to go.

Perhaps this is because Wilfred’s pet doesn’t quite realize that he belongs to anyone. 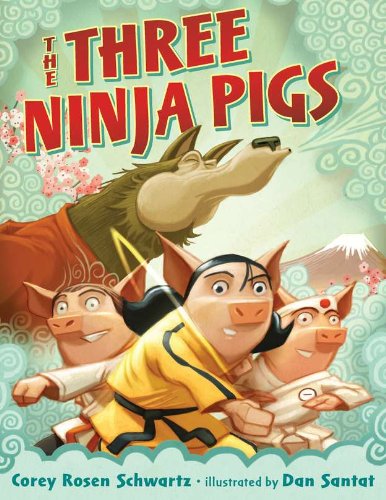 Why does this wolf think he can come to town and blow all the houses down?

These three little pigs just aren’t going to take it from that bully anymore!

The first starts aikido lessons — he’ll make mincemeat out of that wolf! His brother learns a little jujitsu — he’ll chop that guy to pieces!

But when the wolf actually appears, it turns out these two pigs aren’t quite ready after all.

Good thing their sister has been training every day to master some serious karate moves that save the day.

« Friday Flash Blog No. 117 {Plus Features}
10 Ways to Use Weighted Sensory Stuffed Animals »