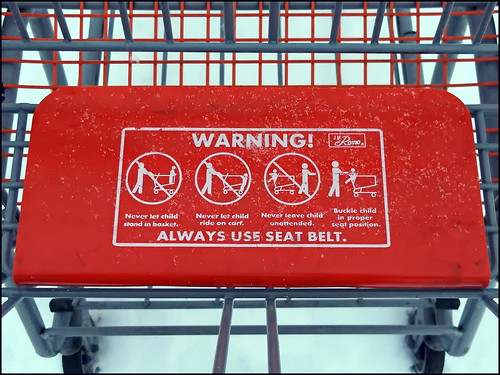 Do you place your infant in her car seat carrier on top of your shopping cart? Putting the carrier inside the cart leaves no room for your groceries; however, balancing it on top of the cart is risky. Sure those carriers can be convenient but are you aware of how they dangerous they be?

Here are some ideas of ways to keep your infant safe while you shop:

Put your child in her stroller. Sure, it’s a pain in the tush but it’s better than placing your baby at risk. I used to push the stroller with one hand and pull the cart with the other. I became surprisingly proficient at it!

Put the infant carrier inside the shopping cart. It won’t leave you loads of room for items but you can stack up and use the undercarriage. When I used to take my infant to Costco, the carts are so big that I even had room to fill up around the carrier!

Carry your baby. Infants absolutely love hanging out in baby carriers, and this is the perfect time to pull out that Baby Bjorn. It’ll give your child some time to feel close to your body and let you get some things done. (Shoot — I used to wear the baby all over the place!)

Have your older children help. Even preschoolers can help pull a cart or push one of the smaller ones. It lets them feel like a big kid while allowing you to push the stroller.

Shop on your own. If possible, you might also try to get somebody to watch your kids while you are shopping so that you don’t even have to bring them to the store with you. This isn’t necessarily realistic, but sometimes getting away for an hour on a Saturday can give you a break from the kids and let them have Dad time.

According to Consumer Product Safety Commission, from 1985 to 1996 an annual average of 12,800 children ages five and under were treated in U.S. hospital emergency rooms for falls from shopping carts. In fact, fall-related injuries significantly increased during that period, rising from 7,800 in 1985 to more than 16,000 in 1996. CPSC data also show that during 1995 and 1996, two-thirds of the fall victims were treated in hospital emergency rooms for head injuries, and more than half of the head injury victims suffered severe injuries such as concussions and fractures.

« Is Your Home Making Your Family Sick? Tips for Cleaner Air
The Benefits Of Exercising: 10 Reasons Why You Should Make Fitness Your New Year’s Resolution »