The Cub Scouts of America hosts pinewood derbies across the U.S. every winter as a friendly competition between boys. However, parents of Cub Scouts could take a cue from the Olympics and learn the meaning of fair games.

This is our first year in the Cub Scouts, and I was excited to find out my son would be racing a pinewood derby car. No, not the kind you sit in but rather a small one you can hold in your hand. It comes as a basic block shaped like a car. You have to assemble the plastic wheels onto what are basically nails that hold the wheels in place. Otherwise, it’s up to you to decorate it how you see fit. 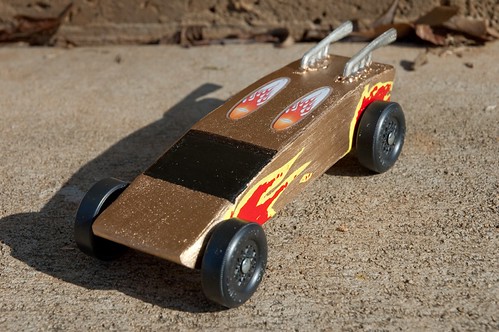 Perhaps it’s my naivety, but I thought this was supposed to be a an enjoyable, friendly competition amongst the boys. That is, until the “weigh in” date was announced. I’m sorry but why on earth would we need to weigh in our car? It turns out that competitors add weights to the car to make it move faster and sometimes even forgo the car kit (a big no-no) to craft their own body. In the past, they’ve actually had to disqualify people for having cars that are too heavy or not made from the same kit as everyone else. It was beginning to dawn on me that this pinewood derby event isn’t really about the boys but about the fathers who want to win.

The whole idea of hosting a Cub Scouts pinewood derby is to create a fun environment where fathers and sons can work together. Of course, moms can participate. But in this case, it was my dad who helped get the car ready.

My dad (with observation from Vman who is only 7 after all) put on the wheels of the car. Vman did help sand down the car a bit, but how much can a seven year old really do? Vman picked the color he wanted the car and then paid attention to how you spray paint a car to give it a good shine. After several coats, Vman was bursting at the seams to be able to hold his completed car. In reality, however, children this age just aren’t going to be creating this car — it’s the dads. And when you put dads in charge, the competition can get ugly.

Other moms who have already been through this process have told me horror stories of dads who weighted the car down too much. And so, at weigh in, they are forced to dig out chunks of wood out of the car just to get it to fit within the weight guidelines. Seriously? So these cars become mangled messes just to be able to compete.

I find it ironic that the Olympic Winter Games are starting this week. Sure, Olympiads use the latest technology to give themselves an edge. But at the heart of the games is friendly and fair competition. It’s a time for that athlete to shine. Otherwise, doping would be acceptable and we wouldn’t have blinked an eye at the whole Nancy Kerrigan scandal years ago.

The Cub Scouts pinewood derby competitions should be about letting each child shine rather than showing off the mechanical skills of their fathers. Tonight is our weight in for our den. I’m hoping the dads will allow their boys to shine… but I have a feeling there will be some who insist that while they’re cheering on for their sons, they’re really cheering on for themselves.

« Are You Making These 3 Diet Mistakes?
I Wanted My Own Bitchin Camero »