My entire family are complete Star Wars fans – so I’m always on the hunt for the perfect Star Wars gifts.

Yes, even *I* owned the complete original Star Wars trilogy before I met my husband.

That’s how much of a geek I am — and darn proud of it!

The other week, my husband came downstairs sporting his beloved R2D2 bathrobe.

I snapped a pic and posted it on Instagram.

Well, people went NUTS over it.

Whether it’s Christmas, Father’s Day, May the 4th or Christmas, the Star Wars fan in your life will love these Star Wars gift ideas.

Hubby in his R2D2 robe. Goodness help me! #starwars

Here is my recommended list of Star Wars gifts for the fan in your life.

Whether it’s May the 4th, Christmas or Father’s Day, any Star Wars gift you give will be a smash. This post contains affiliate links.

Have a kid at home who loves reading about Star Wars? Don’t miss the ultimate list of Star Wars Books for Kids on Mommy Evolution!

Bioworld Star Wars Rebel Alliance Icon Backpack: We use backpacks all the time in our family… and even I wouldn’t mind traipsing through the airport with this fun backpack!

Star Wars Rogue One Wired Controller For Xbox One – Rebel Alliance: This Is The Droid You Are Looking For. Honestly, I kind of want one of these for myself, never mind the boys!

Stormtrooper Stainless Steel Limited Edition Watch Comic Con San Diego Exclusive: This Stormtrooper watch case and buckle are made from Stainless steel. The watch is constructed to withstand up to 5ATM water resistant conditions and is rugged enough to take on any opposing army.

Star Wars Men’s Old Rebel T-Shirt: There are a lot of junky t-shirts out there for our men. But this t-shirt is retro and cool! So you won’t mind seeing it all the time because I’m guessing you your dude is going to want to wear it…. a lot. 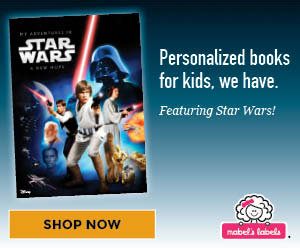 Star Wars Darth Vader Apron: If your man is anything like mine, he loves to grill. Why not make him the life of the party with this apron? He can grill up a mean steak and still look awesome.

Exclusive Star Wars Death Star Waffle Maker: Expect great things of this battle station-like an absolutely delicious breakfast. Sing the Death Star theme song as you goose-step your way to the kitchen table, delivering a waffle made on a fully operational and armored space station. For fans of the original and rebooted Star Wars saga, it’s the ultimate collectible countertop appliance, officially licensed by and approved by the Empire, with fully operational features: regulating thermostat to ensure even browning, five temp settings for preferred waffle done-ness, dual indicator light lets you know when the iron is hot and when the waffle is ready, stands upright and cord wraps under base for compact storage.

Star Wars Death Star Bluetooth Speaker: At first glance this looks like a stylish, silver Death Star for display, but it’s actually a Bluetooth speaker. This little speaker produces a huge sound when paired with a Bluetooth device. Once paired, the Death Star will play any audio format, including music, games, and phone calls. The speaker’s range is up to 30-feet away from the source.

Sphero Star Wars BB-8 App Controlled Robot: My boys are salivating over this toy… but I know Dad can’t wait to get his hands on it!

2 Pack Silicone Mold Ice Cube Tray Ball: What fun would these be at a party!?! And, to be honest, just to through into an afternoon soda for the guys.

The Force Awakens ! Multi-colored Death Star Table Lamp 3D: A glowing edge lit acrylic Death Star Lights inspired by Star Wars. You will be given a 24 Key LED Remote Controller (see below) to customize the colors of the LED desk light. With the remote controller, you will have a variety of light setting which include to power on or off lights, pause or play, dim or change speed of lights and also to create rainbow of colors.

Star Wars Interactech Imperial Stormtrooper Figure: Stormtroopers are elite shock troops fanatically loyal to the Empire and impossible to sway from the Imperial cause. They wear imposing white armor, which offers a wide range of survival equipment and temperature controls to allow the soldiers to survive in almost any environment. Stormtroopers wield blaster rifles and pistols with great skill, and attack in hordes to overwhelm their enemies.

With over 65 different sound effects and phrases, the Interactech Imperial Stormtrooper figure uses a motion sensor to respond to specific movements. Equip the figure with the included blaster accessory to hear battle sound effects, or have the figure engage in hand to hand combat for punching sounds! Gear up figure with jetpack to initiate flight mode and hear amazing sound effects based on different motion-activated aerial maneuvers! Mission is a go!

Whether you’re celebrating May the 4th, Father’s Day, the newest Star Wars movie (YEAH!) or a birthday, the man in your life will love these Star Wars gifts.

If you’re looking for Star Wars holiday decorations – I have you covered! See the Star Wars Christmas-Themed Decorations on Mommy Evolution.

« Fireman Birthday Party Ideas
Why Is Not Feeding Dogs from the Table So Hard? »